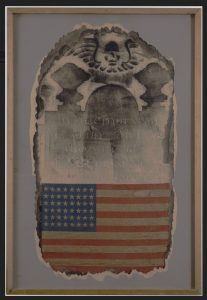 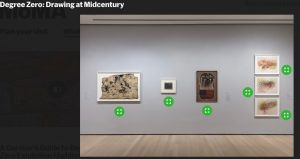 For Tomb Dienes combined her two signature practices, ink rubbing and the use of found objects. Influenced by the Surrealist process of frottage, Dienes first made rubbings of natural objects and household items during a residency in upstate New York in 1953. She quickly deployed this technique outside the studio, creating haunting imprints of colonial tombstones in New England cemeteries. After taping a large piece of paper onto the headstone, she used a roller to apply ink to the sheet to transfer the decoration; the uneven impression captures the idiosyncrasies of the surface and her interaction with the stone.

Dienes viewed her rubbings as more than documents of her environment: “My use of rollers and natural surfaces . . . is a kind of jumping off place for my imagination.” Tomb embodies her inspired amplification of the technique: after Dienes completed the rubbing, she stapled a weather-worn fabric American flag over it and encased the design within two sheets of torn mat board, heightening the sense of decay already palpable in the imprint. In juxtaposing a tombstone with a symbol of American patriotism and democracy, Dienes radically upended the traditional meaning of both icons, inviting numerous new interpretations. Among other possibilities, the work may describe the Hungarian-born artist’s relationship with her adopted country or respond, more specifically, to threats to American democracy at the time, from the Korean War to McCarthyism.