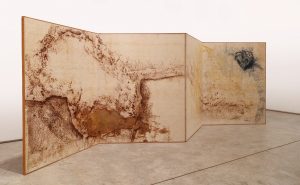 Oct 22-Dec 10, 2021
Art Alliance
The Philadelphia Art Alliance at University of the Arts is pleased to present the first Philadelphia exhibition of works by Sari Dienes.

A brief litany of Sari Dienes’ life only begins to point to her importance. She was born Sari Chylinska in Hungary in October 1898. In her late teens she studied dance under Raymond Duncan, the brother of Isadora. She married Paul Dienes at age 24. After moving to Wales for work, she began working in textile design. In her 30s, she decided to become a visual artist and studied with Fernand Leger, Ande L’hote and Amadee Ozenfant.

She was later appointed assistant director of the Ozenfant School in London, where she hired the young Henry Moore. During a trip to the United States in 1939, she was stranded due to World War II. In the 1940s, Dienes exhibited at the New School, studied printmaking with Stanley Hayter, and taught at Parsons School of Design, the Brooklyn Museum School of Art and in her own studio. She attended The Club and showed her abstract work at Betty Parsons Gallery.

Dienes’ experimental work vastly expanded what was permissible in the visual arts. She was an early influence on younger artists such as Jasper Johns and Robert Rauschenberg, who assisted Dienes in her practice of making textural rubbings in Manhattan.

Her junk constructions were included in MoMA’s Art of Assemblage exhibit. In her 70s, Dienes moved to Stony Point near John Cage and Merce Cunningham. She experimented with color Xerox, made silkscreen murals for the New York State House and became a founding member of AIR Gallery, the first women’s cooperative in New York.

In addition to Dienes’ works, the second floor of the Art Alliance includes analogous efforts by several artists. A small Rachel Rosenthal ink drawing will be juxtaposed with a sensitive linear drawing by Dienes. Rosenthal and Dienes were influential in introducing Robert Rauschenberg and Jasper Johns to each other in the late 1950s, and all enjoyed soirees in Dienes’ 57th Street loft. 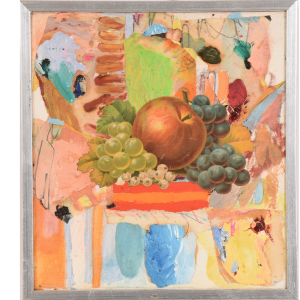 The  exhibition includes mail art correspondence by Ray Johnson, who was a friend of all of the above, and a Dienes frottage of Johnson’s arms quite similar to later rubbing examples by Johns in his prints. There is an early collage painting by Suzi Gablik who attended Black Mountain College with Johnson and Rauschenberg and later helped curate the important show Pop Art Redefined with John Russell. Paintings by Carlos Bunga exhibit some of the same material sensibilities as exemplified by Dienes. And, not last, is a marvelous assemblage portrait of Sari Dienes by Lenore Tawney.

The Philadelphia Art Alliance at University of the Arts is grateful to Pavel Zoubok Gallery and the Sari Dienes Foundation for their assistance in implementing this exhibition.

Our exhibitions are free and open to the public.
Philadelphia Art Alliance at University of the Arts
251 S 18th Street
Philadelphia, PA 19103