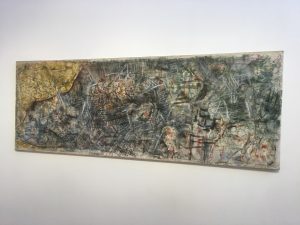 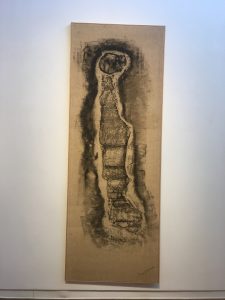 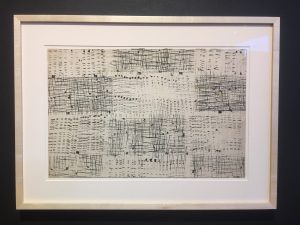 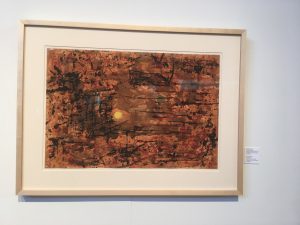 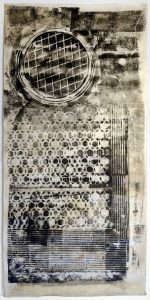 The Museum of Modern Art

We are pleased to inform you that Sari Dienes’ work is currently on view in the Museum’s newly reinstalled collection galleries.

The collection galleries explore a wide range of topics, from a specific medium or discipline, to a particular place, moment in time, or shared creative idea. They have been conceived by teams of curators from all fields and at all levels collaborating closely. An ongoing program of frequent reinstallation will feature a wide range of artworks in new combinations—a reminder that countless ideas and histories can be explored through the Museum’s rich collection.

We hope you will have an opportunity to visit our expanded galleries soon.

Opening Party | October 18, 7:00-11:00 PM: The largest event of the opening sequence; a celebratory party for all MoMA family and the art world at large.

to view the entire Sari Dienes collection at MoMA:

Closed on Saturday, May 25 for Memorial Day

Pavel Zoubok Fine Art is pleased to present SARI DIENES: Atmospheric Changes, an intimate exhibition of paintings and works on paper from the late 1940s and early 1950s by this pioneering American artist.

While best known for her signature frottages, or rubbings of the 1950s and 1960s, the broader trajectory of Sari Dienes’ (1898-1992) oeuvre tells a more expansive story about her relationship to modernist styles and strategies during the middle decades of the twentieth century. Like many artists of her generation, Dienes explored the aesthetic terrain of the unconscious mind vis-a-vis Surrealism during the 1930s and 1940s, employing strategies such as decalcomania, automatic drawing, hybrid imagery, and chance operations in her work. But by the mid-40s, she too felt the gravitational pull of gestural abstraction with the advent of Abstract Expressionism, being as she was, at the epicenter of its flowering in postwar New York City.

The current exhibition features a select group of works that reflect this fundamental shift, not only in Dienes’ work, but in the larger history of American art. In works such as Forest Edge and Web Maze, pictorial spaces that recall the dream-like atmospheres of surrealist decalcomania (a technique involving the pressing of paint between sheets of paper.) are punctuated with “drips”, pours and gestural washes of color that form web-like networks that vibrate with energy. The circuitous and seemingly random line of these enigmatic compositions belie a rigorous grounding in mark-making, a hallmark of her training with the Purist painter, Amédée Ozenfant.

Sari Dienes was born in Debreczen, Hungary in 1898. During a career that spanned some six decades, she worked in a wide range of media, creating paintings, drawings, prints, sculptures, ceramics, textile designs, sets and costumes for theatre and dance, sound-art installations, mixed-media environments, music and performance art. Prior to her arrival in New York City in 1939, she lived in Paris and London, where she studied with Fernand Léger, Amédée Ozenfant, André Lhote and Henry Moore. Her work has been exhibited nationally and internationally since the early 1940s, with notable exhibitions at the storied Betty Parsons Gallery and later as a founding member of the Feminist collective, A.I.R. Gallery. Her work has been included in major museum exhibitions, including the Museum of Modern Art, the Solomon R. Guggenheim Museum, the Brooklyn Museum, The Art Institute of Chicago, the Rhode Island School of Design, the Museum of Fine Arts Boston and the Wadsworth Atheneum. Recent exhibitions at The Hammer Museum, The Menil, The Drawing Center, Pavel Zoubok Gallery and Marc Selwyn Fine Art, as well as new scholarship, have brought renewed interest in her life and work. 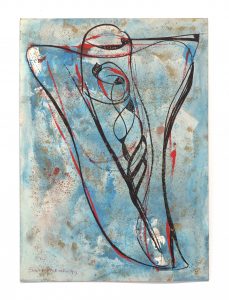 Pavel Zoubok Fine Art is pleased to announce our participation in Master Drawings New York (January 26 – February 2, 2019) with a special exhibition of early drawings by Arshile Gorky (c. 1902-1948). The twenty pen and ink drawings that form the core of our presentation come from an incomplete sketchbook of 1931, purchased from the private collection of legendary dealer and champion of Surrealism, Julien Levy, during the 1970s.

While some of the drawings had been reproduced in Levy’s major monograph on the artist, published by Abrams in 1966 and in a small exhibition and catalogue of Gorky drawings at M. Knoedler & Company in 1969, the whereabouts of this important group have until recently been unknown. The drawings reflect not only the strong influence of Picasso, but the seeds of a decidedly Surrealist sensibility that would usher Arshile Gorky into the cannon of that movement. Together, they tell a compelling story about the process and development of a great artist, one that he regarded as intimately tied to tradition and historical continuity, and about modernist art between the wars. 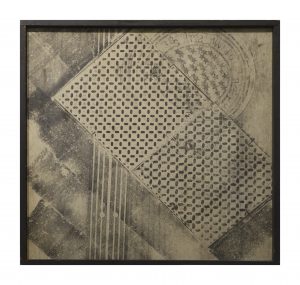 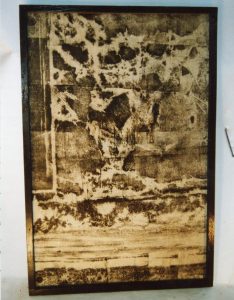 Visit this wonderful slideshow of all the places and people in Rauschenberg’s world, with several pages on Sari and her loft at 58 West 57th Street

In 1959, Robert Rauschenberg wrote, “Painting relates to both art and life. Neither can be made. (I try to act in that gap between the two.)” His work in this gap shaped artistic practice for decades to come.

The early 1950s, when Rauschenberg (1925–2008) launched his career, was the heyday of the heroic gestural painting of Abstract Expressionism. Rauschenberg challenged this tradition with an egalitarian approach to materials, bringing the stuff of the everyday world into his art. Working alone and in collaboration with artists, dancers, musicians, and writers, he invented new, interdisciplinary modes of artistic practice that helped set the course for art of the present day. The ethos that permeates Rauschenberg’s work—openness, commitment to dialogue and collaboration, and global curiosity—makes him, now more than ever, a touchstone for our troubled times.

Robert Rauschenberg: Among Friends, the first 21st-century retrospective of the artist, presents work from six decades of his widely celebrated career in fresh ways, bringing together over 250 paintings, sculptures, drawings, prints, photographs, and sound and video recordings. Acclaimed artist and filmmaker Charles Atlas is collaborating on the exhibition’s design to foreground Rauschenberg’s work with dance and performance. MoMA’s presentation is structured as an “open monograph”—as other artists came into Rauschenberg’s creative life, they come into the exhibition, mapping the exchange of ideas. These figures include John Cage, Merce Cunningham, Sari Dienes, Jasper Johns, Billy Klüver, Yvonne Rainer, Paul Taylor, David Tudor, Cy Twombly, Susan Weil, and many others.

The exhibition is organized by The Museum of Modern Art, New York, and Tate Modern, London. 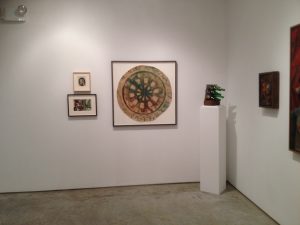 For The Art Show 2017, Pavel Zoubok Gallery is presenting important works by Sari Dienes (1898-1992), Addie Herder (1920-2009) and Stella Snead (1910-2006), three fiercely independent artists whose distinctive creative paths overlapped in the storied Sherwood Studios during the 1950s and 1960s. Our installation will focus on SARI DIENES’ shift from painting and drawing to frottage, or “rubbing,” a process of layering urban and natural textures including manhole covers and sidewalks into proto-Pop icons and all-over abstractions. Upon taking up residency in 1945, Dienes met and began a lifelong friendship with composer John Cage and choreographer Merce Cunningham. She quickly established herself in the epicenter of the art world during the 1950s, influencing artists such as Robert Rauschenberg, Jasper Johns, Mark Rothko and Ray Johnson. Dienes was born in Debreczen, Hungary in 1898. From 1928-1935, she moved to Paris and then London where she studied with Fernand Léger, Amédée Ozenfant, André Lhote and Henry Moore. In 1939, Dienes relocated to New York where she would remain until her death.

While many of her contemporaries were filling enormous canvases with the barest of pictorial adornment, ADDIE HERDER went her own way, creating complex facades and “machines” in spaces often no larger than a postcard. Herder used all manner of ephemera to create miniature architectural structures with a theatrical sense of atmosphere and depth. Reflected in the dark, shadowy interiors of her paper constructions is a mechanistic sensibility that underlies much of her work from the 1950s and 1960s, a period that began in New York City at the Sherwood Studios and continued on the streets of Paris. Trained at the Tyler School in Philadelphia during the late 1930s, Herder moved to New York in 1946 with her then-husband. The two opened a successful commercial design business in a large studio in the Sherwood building, where Herder also met and befriended fellow artists Sari Dienes and STELLA SNEAD.

Snead’s decision to become a painter during the mid-1930s marked the beginning of a long love affair with places unknown, both real and imagined. While studying in her native London with Ozenfant, Snead became captivated by Surrealism’s fantastic imagery. There she worked alongside fellow artists Leonora Carrington and Sari Dienes. She fled Europe in November of 1939 and divided her first decade in this country between New York and Taos, New Mexico. It was her travels across the American West and Southwest that are most clearly reflected in her paintings and drawings from that period. By the 1950s, a severe bout of depression and a timely invitation to India set Snead on a decidedly new course as a photographer. She would eventually shift her second home from Taos to Bombay, where she would return to Surrealism in a series of fantastical photo-collages and photomontages during the 1960s and 1970s. 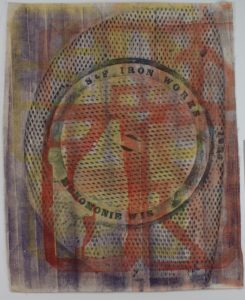 Organized annually by the Art Dealers Association of America (ADAA), The Art Show offers intimately scaled and thoughtfully curated presentations by the nation’s leading fine art dealers, providing audiences a rich selection of works from the late 19th century through today.  Sari Dienes will be featured by Pavel Zoubok alongside Addie Herder and Stella Snead.  Highlights include colorful manhole rubbings from the 1950’s on, as well as a major panel  exhibited in Japan in 1958. 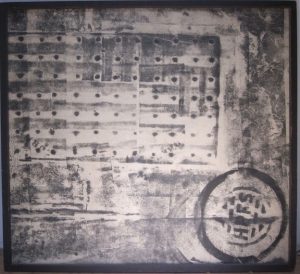 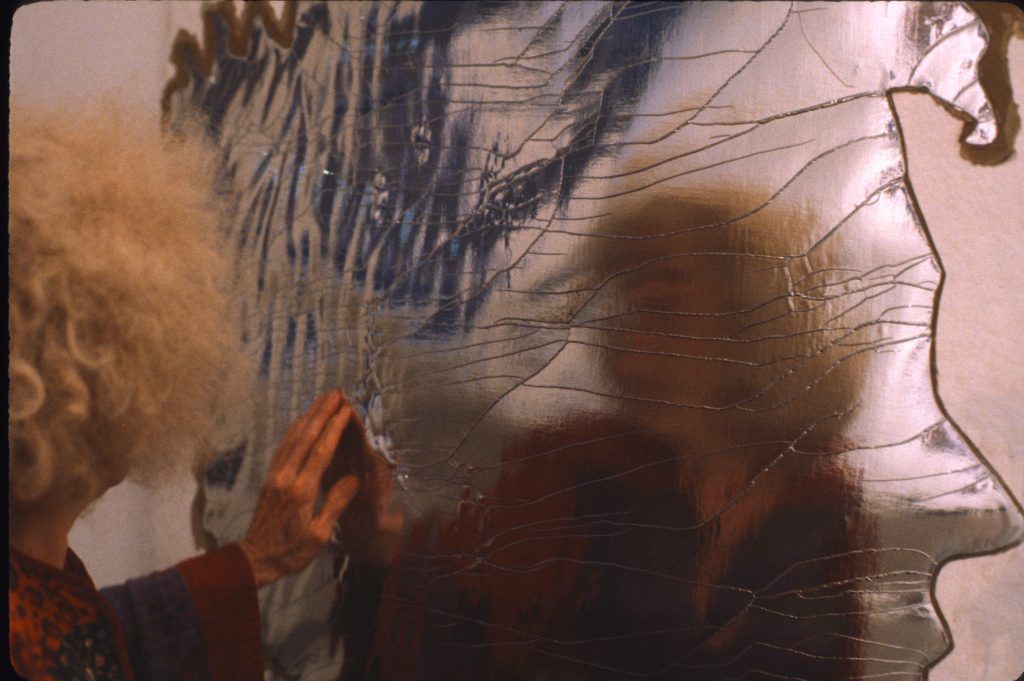 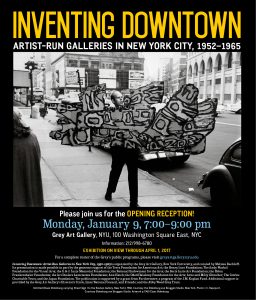 This screening is part of: INVENTING DOWNTOWN

What takes place in the privacy of the artist studio? What is it like to experience an artist at work? These two programs answers these questions through short films that reflect a variety of cinematic styles due in no small part to each filmmaker’s close relationship to their subject. Common to all the films is how artists allow their filmmaker friends into their studios to capture their process, their method of making art. The result is an intimate dialogue between filmmaker and artist that remains open ended and exploratory.

In spring 1951, the artist-organized Ninth Street Show catalyzed the formation of artist-run galleries in lower Manhattan. The show’s location – in a vacant store at 60 East Ninth Street – and the opportunity to see recent works by more than fifty established and emerging artists drew attention to inexpensive spaces east of Broadway. Rents for vacant commercial properties along Tenth Street were under $100 per month, and the low cost attracted groups of artists to rent space under cost sharing agreements, a system known as “co-ops.” By the late 1950s another gallery type emerged, the short-lived, self-financed galleries that focused on experiments in artists’ lofts in various downtown neighborhoods. Experimentation incubated new art practices – environments, performance, geometric objects, participatory art, and political art. Importantly, artists were themselves defining and promoting the projects.

Artist galleries supported more than the visual artists who exhibited; the spaces became vital centers for dialogue and debate, forging alliances across disciplines, and among poets, writers, critics, musicians, photographers, and filmmakers. Artist galleries radically expanded the parameters for visual art, and in so doing the artists and the exhibitions they produced became an important subject for filmmakers. This four-part series of short films examines three themes inspired by New York’s Downtown gallery culture: “Lives of Artists,” intimate portraits of artists at work; “Exhibition as Stage,” subjective views of artist performances that resonates as part documentary and part visual experiment, and “Artists Make Movies,” searing statements in film or video representing the artist’s aesthetic concerns.

This series is presented in conjunction with the NYU Grey Art Gallery’s exhibition “Inventing Downtown: Artist-Run Galleries in New York City, 1952-1965,” which is on view January 10-April 1; for more info, visit: greyartgallery.nyu.edu. And for further Anthology programming relating to the exhibition, click here and here.